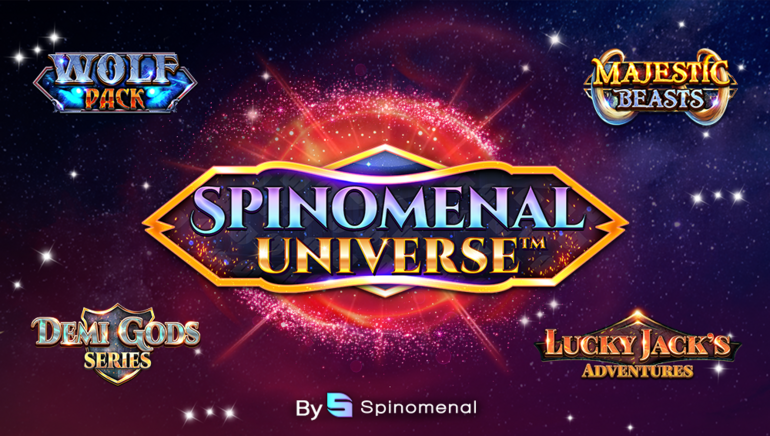 Deemed a hat-trick of new titles, the Universe series of games by Spinomenal is making waves all over the world. This premier iGaming content provider is internationally renowned for its high-quality casino games with interactive features, sharp audiovisual elements, and engaging attractions. An exciting new series of games known as the Universe project showcases three brand-new titles, including the following: Majestic King – Sunset, Wolf Fang – Iron Wolf, and Demi-Gods IV – Thunderstorm.

These thrilling video slot machine games are slated for release during May. They are part and parcel of a network tournament campaign. This campaign features the grand premier of a new series of Universe-themed games. A global network of integrated elements means that players can experience first-hand what it's like for all their favourite characters from different series to coexist in the same gaming universe.

Spinomenal's latest foray is backed by dynamic technology that is easily supported by robust growth strategies, exciting activities, and dazzling promotional offers. All of these can be introduced at any point. The new games have roots in the wildly popular Majestic Beasts, Wolf Pack, and Demi-Gods series of games. In addition, loads of promo offers are slated for release, including the likes of network tournaments. With these tourneys, players have multiple chances to land winning prize pools.

The top game in the series is Demi-Gods IV – Thunderstorm. A pulse-pounding tournament is slated to take place on May 2, 2022. The raison d'être for Spinomenal's phenomenal Universe concept is to drive massive player engagement. It's also adept at maintaining high retention levels as players experience fantasy-laden worlds filled with action, adventure, and winning potential. Since players can control their destiny by selecting the next chapter, they can also determine who they meet in the next game.

Spinomenal's Nir Ronen (CCO and COO) said, 'Players have come to adore the leading characters from our series, and we wanted to take that to the next level by introducing our Spinomenal Universe concept. Thanks to this industry-first game series strategy, players can immerse themselves in storylines that amalgamate different worlds. In addition, the tournament feature means there are potentially huge prizes on offer each month.'

Cutting-edge technology ensures that players are presented with interactive game features, high-quality audiovisuals, and maximum entertainment value. Spinomenal games are easily integrated through a single API and are perfectly tailored to PC, Mac and mobile. This innovative tech provider is a cutting-edge content developer with many built-in accoutrements.