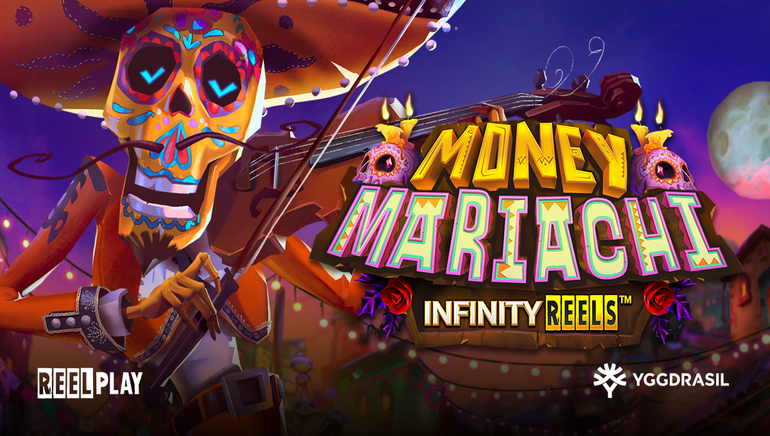 Acclaimed casino game developers Yggdrasil and ReelPlay have started 2022 with a bang with the release of Money Mariachi Infinity Reels™ slot machine. Fans can celebrate as 4 musicians band together with rousing music to raise the spirits of the dead!

South African online casino players are celebrating the New Year with a much-anticipated collaboration between Yggdrasil and ReelPlay. The name of the game is Money Mariachi Infinity Reels™. This Mexican-style slot machine game is a celebration of the Day of the Dead a.k.a. Dia de Los Muertos. This audio-visual bonanza brings this game to life with the money mariachi musicians. The wild parties and festive spirit are enough to wake the dead – that's precisely the point of this new video slot.

The base game features a 3 x 4 reel-grid format, along with the world-famous Infinity reels™ game mechanic. For every successful outcome, online casino players get to enjoy an additional spinning reel & respin. The game creators have also added in an increasing multiplier for added value. When 12+ spinning reels feature in a single spin, it's possible to boost your winnings with up to 888X your bet bonus. This is applicable during regular spins and LevelUp respins too. Simply land 3X Shrine symbols to trigger the LevelUp feature while you’re searching for multi-colored skulls to advance.

A Musical Score That Delivers More

The game is peppered with modifiers to boost your winnings. This occurs during the LevelUp Respins round of play. Each musical instrument can enhance the Shrines adding lots of ‘soul power’ into the mix. There are cool hymns, melodic violins, booming trumpets, and festive guitars playing in the Money Mariachi Infinity Reels™ slot game. The bonus rounds are filled with winning potential, as the music keeps on playing. As the latest video slot game from the YG Masters from ReelPlay, Money Mariachi Infinity Reels™ impresses with its cutting-edge technology and immersive gameplay.

Yggdrasil’s Head of Product and Programs, Stuart McCarthy lauded the release of the new game which he described as an exciting release through the YG Masters Program.

The CEO of ReelPlay, David Johnson proudly announced that Money Mariachi Infinity Reels™ was the first bonus round collectible slot machine game for the company.

The Day of the Dead is the final day of the All Hallowtide season – a day of remembrance. It's also a day of celebration where participants revel in the magic of music to awaken the spirits of the dead. In this slot machine game, it's the 4 musicians who come together as the Magical Money Mariachi band to rouse the spirits of the dead. Players can win up to 50,000 X, with Guitar Wilds, Shrine symbols for LevelUps, Respins, Multipliers, and Bonuses in play.