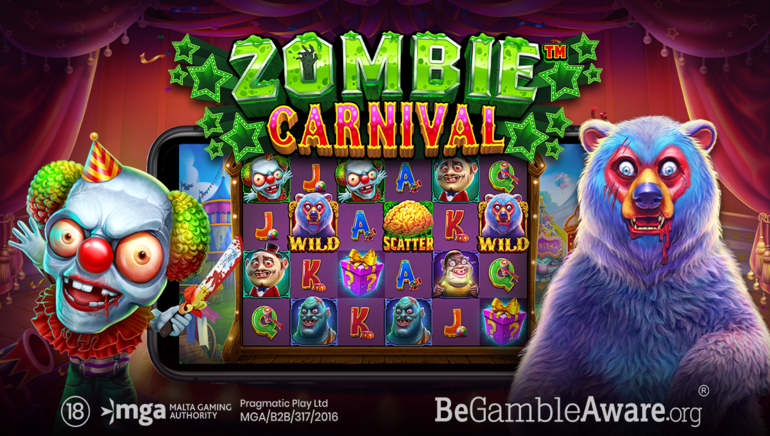 Pragmatic Play has ramped up the production of monthly slots, with up to eight games released. The lineup for 2022 includes many iconic games, including a plethora of slots with original graphics. Zombie Carnival™ is one of their latest releases, a game with a frighteningly good team and payouts. This is the perfect slot for punters who seek a mix of gruesome and humorous games with a high return to the player.

Join the Festival of the Undead

Zombie Carnival™ promises to be a fantastic game for punters who appreciate Halloween-themed games. The best part is that you don’t have to wait for Halloween to spin the reels of this fascinating game. That’s because the leading content provider to the iGaming industry has released the game in the first week of June. The symbols populating the reels are in complete accord with the main theme and feature zombies, as well as other nefarious creatures.

The wild symbol will be paid a bear and it can only pop up during the free spins. On the bright side, a mystery icon can also appear to turn into one of the paying symbols during the free spin rounds. In anticipation of these bonus games, punters will celebrate the appearance of the scatter symbol which depicts a brain. It can only be revealed on the second, third, fourth, and fifth reels, with two or more being needed to start the bonus round. During the regular game, the slot has 4,096 ways to win and eight paying symbols.

Pragmatic Play has a reputation for producing games that catch the eye of prospective players while paying above the average. Zombie Carnival™ fits the profile and it can be delivered the biggest winnings during the bonus rounds. Free spins are awarded at the beginning of this round and scatter symbols are consumed by the wild symbol closest to them. When this happens, the wild symbol replaces the scatter and winnings are multiplied by a factor of 1x.

Depending on your country of residence, you could activate the Buy Free Spins feature and jump straight to the bonus round. There is a price for doing so, namely 80x the stake but it is an investment worth making by punters who seek the biggest winnings. If you enjoy spinning the reels of Wild West Gold Megaways™, Cleopatra™, and Little Gem™, you should check out Zombie Carnival™.