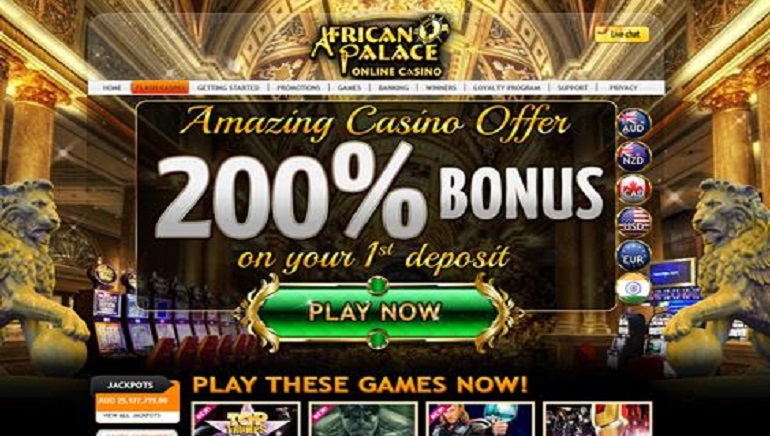 A barrage of big bonuses is waiting for new players at African Palace Casino, with the addition of extra funds on top of their first four deposits.

African Palace Casino is welcoming new players with up to $500 in bonus money over their first four deposits. These funds can be used to play even more of the thrilling games at this exotic casino, where the treasures of African royalty bring a luxurious style to match the big wins that can be claimed on their slots, table and card games.

Anyone signing up to African Palace Casino can get started with three times the amount deposited thanks to a 200% match bonus that can be worth up to €200. So for example, if the first payment into a new African Palace Casino account is €50, they top this up with an extra €100 in bonus money, and to get the full €200, the first deposit only needs to be €100.

For many online casinos, this would be it, but African Palace just keeps on giving, with second deposits being boosted by a 50% bonus worth up to €150, and then a third deposit deal worth 75% of the amount paid in up to a maximum of €100. Simply pay €300 and then €132.50 to automatically receive the biggest rewards, but smaller payments still get credited with the same percentages in bonus money.

But that's still not the end of it, with fourth deposits qualifying for a further 100% bonus worth up to €50, all adding up to a grand total of €500 in free casino funds waiting to be claimed.

All of this money gets paid into a new player account immediately, ready to use on the fantastic selection of Playtech games that make African Palace such a cosmopolitan place to play.